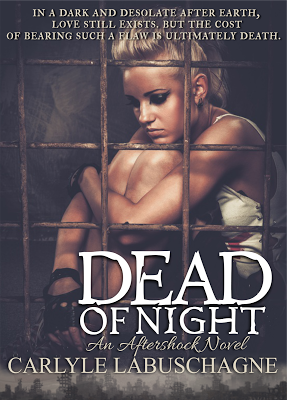 Carlyle Labushagne’s Dead of Night was first published in 2014 in the USA. It’s just been re-edited with new content by Fire Quill Publishers! It was nominated by Kindle Hub for Best Dystopian and by UtopYAcon Best Dystopian.


The blurb: In a dark and desolated After Earth, love still does exist, but the cost of bearing such a flaw is death.

World War III has left Earth in utter turmoil. People’s beliefs are said to be the cause of the worldwide destruction. After The Clearing new laws are set about – to show certitude in anything besides the law is weak and chargeable as mutiny. To be illogical and have faith in religion is illegal, to be limitless is dangerous. And Illness is seen as a defect – all flaws that are inexcusable.
But to love is the greatest betrayal of all man kind. It is a fault the world has long forgotten and punishable by death, a fatal risk Aecker and Opel are fully prepared to take – because in love there is freedom. But how far can they push back before it claims their lives and of those they care about?

Buy it from Smashwords. Amazon. Barnes & Noble . Add it to your Goodreads list. Check out its creative page including the playlist & image board!

Carlyle is an South African award-winning author, with a flair for mixing genres and adding drama to every story she creates. For now she’s happy to take over the world and convert non sci-fi believers. Her goal as an author is to touch people’s lives, and help others love their differences and one another by delivering strong messages of faith, love and hope within every outrageous world she writes about.“I love to swim, fight for the trees, and am a food lover who is driven by my passion for life. I dream that one day my stories will change the lives of countless teenagers and have them obsess over the world literacy can offer them instead of worrying about fitting in. Never sacrifice who you are, its in the dark times that the light comes to life.”

She has used writing as a healing tool, and that is why she started her very own writers support event – SAIR bookfestival. “To be a helping hand for those who strive to become full times writers, editors, bloggers, readers and cover artists – its a crazy world out there you don’t have to go it alone!”  Follow @CarlyleL for all updates. Founder of SAIR Book Festival   Co Founder of Fire Quill Publishing.   Founder of Help build a library in South Africa. 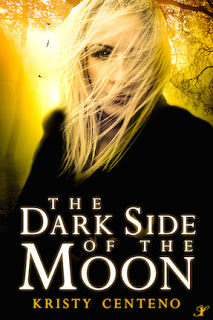 Blurb:
During her darkest hour, will she find the courage to seek the light?
Marjorie has eluded both capture and death yet again, but her days are numbered. The old threat has resurfaced to endanger everyone she cares for and only a forged alliance with a member of royal blood will guarantee their safety and hers.
However, in the midst of accepting who she is, Marjorie has to come to terms with the fact that those she considered friends may be anything but, and the mother she thought dead may have been missing against her will.
A relationship in turmoil, a storm brewing in the distance, a shattered tranquility…will she find the courage to save her loved ones even if that means losing her humanity?
Buy the ebook at Amazon, B&N, Kobo. The paperback at CreateSpace.

September is here and with it come autumn sales, the Brooklyn Book Festival and renewed writing pushes. I’m hard at work on book three in my Art of Love romance series, tentatively called Girl and the Gamer. To help celebrate the series so far, Shades of Rose is running a three-day book blast and a great sale for the boxed set, which includes the first two books. It is marked down from $3.99 to $1.99! If you’re curious about Book three, it has Sienna dashing back to her hometown in Pennsylvania to see her mom in the hospital, who is hanging on with a strange ailment. Sienna runs into some old friends and a very sexy former enemy, who is mind-blowingly different than he was when she knew him in middle school.


The Shades of Rose Book Blast tour for the Art of Love Boxed set (links go live the day of)
*** Enter the Rafflecopter on any of these blogs to be in the running for a $20 gift card & an eBook of book one, Model Position***

Giving you virtual hugs if you help spread word by tweeting about the book blast.
Here are two pre-written tweets. Thanks!!!!!!!!!
1.
#Enter #Rafflecopter to #WIN $20 #giftcard & #ebook. Plus HUGE #Sale on #Sweet and #spicy #romance #boxed set!!! http://readingwritingandroses.blogspot.com/2015/09/art-of-love-books-one-and-two-by-kitsy.html 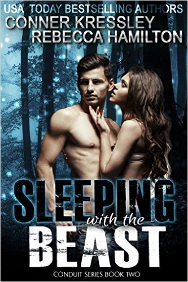 Book two in the Conduit series.

After narrowly surviving a murderous mob, curvy Conduit/Supplicant
Charisse and alpha Beast Abram escape to the remote island of Grimoult,
where their relaxing vacation soon turns into a sinister suicide
mission.

99 cents for a limited time!