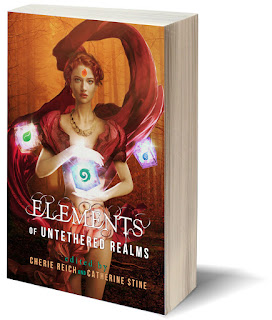 The complete ELEMENTS Anthology is OUT!
From USA Today, Amazon bestselling, and popular science fiction and fantasy authors who call themselves Untethered Realms come the Element Anthologies: Twisted Earths, Mayhem in the Air, Ghosts of Fire and Spirits in the Water. Edited by Catherine Stine and Cherie Reich. Sample this eclectic range of speculative fiction and discover new authors.

Amazon USA, KOBO, B&N/Nook, Apple, Google Play, Amazon UK, Amazon AUS, Amazon CA
Get the whole series in one edition here, or scroll down to get each one separately! 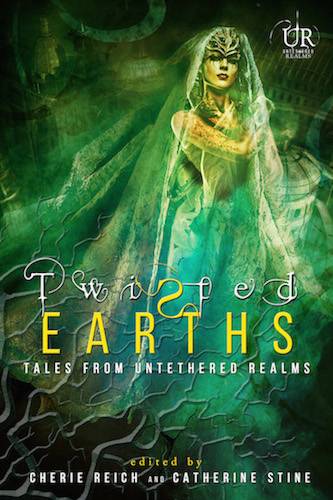 These stories are as varied as the soil in the universe—sandy loam, clay knotted with roots, dreaded paths through unexplored planets and enchanted forests, lit by candlelight and two moons. Enjoy this weird and wonderful volume!

M. Pax offers Patchworker 2.0. Specialists with digital interfaces are the only ones who can distinguish between biological energy and mechanical pulses, and “patch” AIs, which hold the world together. Patchworker Evalyn Shore meets up with an AI with deadly intent.

Cherie Reich presents Lady Death. Umbria, a beautiful and powerful swordsmith, is given an impossible task by her brother Leon when he asks, “You are the assassin. Are you scared to destroy Death when you are up to your elbows in it?”

Angela Brown presents In The Know. Jacob, a loyal family man is struggling to stay out of debt when he’s hired to report on big plans for a future Detroit. He’s given a mysterious manila envelope with instructions to “open it alone” or pay the price.

Catherine Stine offers The Day of The Flying Dogs, a sinister tale of brilliant, troubled NYC high-school student, Theo. He experiences a day at Coney Island that includes drugs, delusions, a lonely capybara, Nathan’s hotdogs and a mind-bending lesson in our very twisted universe.

Christine Rains gives us The Ole Saint, sweet yet heartrending. Ezra longs to fit in and have boys stop calling him witch and freak, yet his unique supernatural skill sets him apart, and the last gift from The Ole Saint cinches the deal.

Graeme Ing presents The Malachite Mine, a gripping, scream-inducing ride. Whatever was Mary thinking when she accepted her husband’s gift of a most terrifying twenty-first birthday celebration in an abandoned Russian mine?

River Fairchild offers A Grand Purpose. Rosaya is soon to be married, but she’s unhappy with her assigned match. She’s more intoxicated by the older Firrandor, a wizard she hardly knows. When Rosaya is accused of killing an oracle boy, all bets are off, not only for her love, but her freedom.

Gwen Gardner presents Ghostly Guardian. Indigo and her rib-tickling ghost-busters must travel to a dangerous pirate-laden past in order to unearth a curmudgeonly eighteenth century spirit plaguing the Blind Badger Pub.

Misha Gerrick presents Red Earth and White Light. Emily, a young ghost bride has long haunted a house. She yearns to cross over into the afterlife, but she’s trapped in memories of lilies and betrayal. 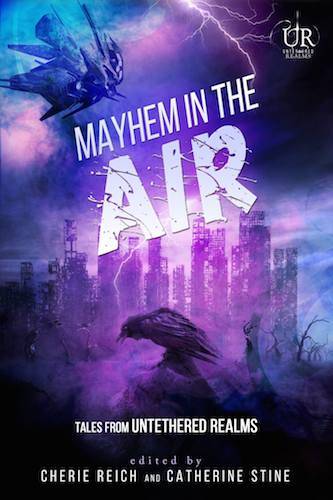 Meet hot robots, hungry winds and the goddess of chaos. Explore alien planets, purgatorial realms, and a shocking place where people bury the living with their dead.

Get Mayhem in the Air:

Graeme Ing gives us Mass Transit. For Emily, mind over matter is not just a saying, but the gateway to her career among the largest starships built by man.

River Fairchild presents A Tangled Weave. A TimePulse rips through the Great Tapestry of Life, leaving Earth’s history in a jumble, and Death and Chronos in a race to save the world yet again.

M. Pax offers Corrosive. In a world ruined by pollutants, Bex sets off to establish a new homestead with her dreamy robotic man. Already farming her plot of land is another dreamy man with radical ideas, presenting new challenges as corrosive as the air.

Gwen Gardner gives us Saving Scrooge: A Short Story Prequel to the Saving Marley Series. Marley is sent from purgatory to save the soul of his old friend. Can he save his own in the bargain?

Christine Rains offers The Silent Wind. A team of specialists dispel a mysterious storm on an alien planet to prepare it for colonization. One by one the crew disappears until only a seasoned soldier remains. How can he battle a hungry wind that makes no noise?

Cherie Reich gives us Paper Lanterns. In order to keep his promise to his daughter, Mayor Alfred Merry must betray the woman he loves.

Misha Gerrick presents Chaos. Hope. Love. Although Eris is the goddess of chaos, her life has fallen into a nice and comfortable routine. Until someone from her past shows up in her bookstore.

Julie Flanders offers Cardinal Sin. Beleaguered hospital workers bury the living with the dead in the midst of a tuberculosis epidemic and a seething spirit vows vengeance from the skies.

Cathrina Constantine presents The Ark. Plagued with memory flashes of fiery explosions and running for her life, Fallon emerges from a drugged stupor to find herself in an airborne Ark, and the earth below is a drowning wasteland. 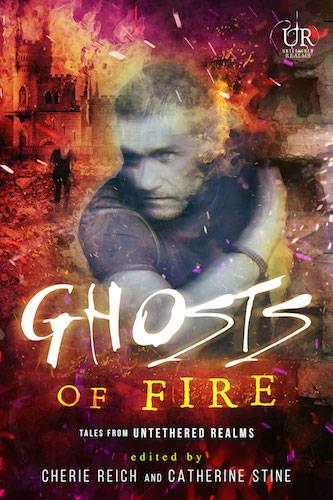 Get Ghosts of Fire:

Jeff Chapman offers The Flaming Emerald. When Orville finds an emerald in a pawnshop, Jimmy suspects there’s trouble ahead, which is precisely what they encounter, trouble of a very weird and supernatural kind. Will they rid themselves of the cursed jewel before the flames scorch them?

Meradeth Houston presents The Cost of Greatness. The newly elected President swears he will rid the country of Otherkind, no matter the cost. When violence breaks out, one question must be answered: what is the cost of peace?

Cherie Reich gives us On Day 168. For 168 days, a dragon imprisoned Astryd in his cave, but the chieftain’s daughter has escaped to discover the dragon may not be her only enemy.

M. Pax presents The Vagaries of Eloise Stanton. Lucy’s family disappeared when she was a child, lost in a world of mirror. The reflections of her family’s faces haunt her, plead with her for rescue. Before they can be reunited, Lucy must battle the cruel, non-human woman, standing as a barrier between the two realms.

Gwen Gardner offers Mind the Gap. Carl James wants to impress the lovely Detective Inspector Madison Perry by helping her catch an international art thief. Little does he know his world will change when he steps through the ancient standing stones and finds himself an unintentional Gap Walker.

Misha Gerrick gives us Ryan. As the oldest griffon in existence, nothing thrills Ryan more than hunting down Aleria, the most powerful phoenix. But when the blitz traps both immortals in a lethal struggle, he discovers she might be more than his prey. She might just be his salvation.

Catherine Stine presents Rollerskate Boys. An old shoe warehouse seems like the perfect place for artist Lily to set up a studio. But after moving in, she’s tormented by clatters in the hall and ghostly trails of boys on roller skates. When a deadly fire erupts, she’s no longer sure of what is real and what’s a figment of her nightmares.

Christine Rains offers The Torchbearer. Sent to a dark crossroads by Hekate’s command, Desma must listen to the words of a handsome prophet whose ominous message mystifies as much as he captivates her.

Angela Brown gives us In Plain Sight. Kazel and Amandine are best friends with little secrets to hide. When a boring study session at the library comes to a screeching halt, it forces them to put all their cards on the table and into plain sight.

River Fairchild offers Demon in the Basement. A man returns to his childhood home, determined to destroy the evil residing within it… or die trying. 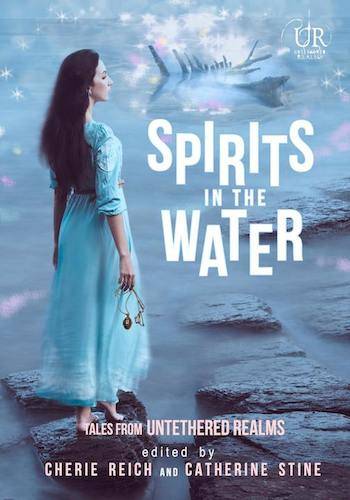 A haunted journey on a riverboat, water sprites borne of pennies; preternatural creatures, ancient serpents and The Lady of the Lake lurk in dark waters. Raging storms and magical rainbow fountains. Water is spectacularly beautiful but also treacherous.
Get it at: Amazon, Apple, Kobo, B&N, Google Play, Smashwords
Angela Brown gives us Extraordinary. Puberty hits Angelique like a gut punch and brings about a change, forcing an unexpected revelation about her past. All seems well until a vicious storm tears through her Texas community, and Angelique learns there are worse things than a little change.
Jeff Chapman offers The Water Wight. When a drowned girl changes her mind about suicide, Merliss and her associates face a fearsome, preternatural creature.
River Fairchild presents You Can't Go Home Again. A young woman, filled with regret about the past, goes on a journey and discovers more than she bargained for.
Gwen Gardner gives us Shake, Rattle and Row. Harlow Grayson has the chance to rid herself of a pesky ghost but she must first brave a haunted riverboat and recover a family heirloom. What she finds might be more than she can handle.
Misha Gerrick gives us The One Who Would Wield the Sword. Nikka is supposed to be nothing more than dragon bait so a real dragon hunter can do his job, but the Lady in the Lake has other plans for her.
Meradeth Houston presents The Flood. Sometimes a flooded kitchen isn't the unluckiest thing to happen to you.
Simon Kewin offers us The Waters, Dividing the Land. Hyrn the horned god of the woodlands is learning the meaning of fear. Death magic blights the land, threatening everyone and everything. To save what he can from spreading corruption he turns to the ancient river serpents, but they’ve grown old and distant, and may not hear his call at all.
M. Pax presents The Wallows. Evernee Weems wants to escape this world in the worst way. Her daughter needs everything, the rent is being raised, Evernee’s job barely pays minimum wage, and she has little hope for better. Inside a puddle is a different reality. She jumps in, happy to trade her problems for a life in which worries don’t exist. Or do they?
Christine Rains gives us Frozen. A necromancer is on the frozen moon of Saturn where the dead do scream.
Cherie Reich presents The Folding Point. Aimee's fight against those who banned paper magics has begun.
Catherine Stine offers Maizy of Bellagio. April still searches for her mother who vanished nineteen years ago from the fountain at Hotel Bellagio in Vegas. Can Maizy, a water sprite who works the fountain’s pink colors begin to help the three generations of eccentric women tortured by this tragedy?